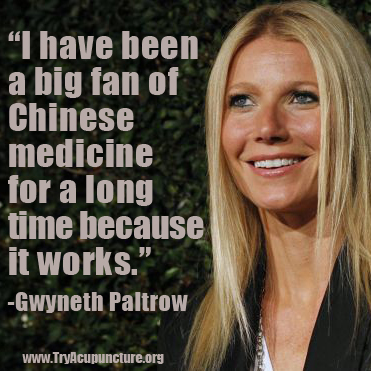 Actress Gwyneth Paltrow is another celebrity advocate of traditional Chinese medicine. Paltrow has received acupuncture treatments, cupping, herbal remedies, and even follows certain Chinese medicine dietary guidelines and principles. In fact, in an interview she credited acupuncture with allowing her to reach a “new level” in her life. She later wrote, “those little needles have helped me through many an ailment.”

After a cupping session in 2004, Paltrow attended a film premiere with round marks visible on her back. The media immediately latched on to the story. In an interview with Oprah Winfrey, the actress said cupping, “feels amazing, and it’s very relaxing, and it feels terrific. It’s just one of the alternative medicines that I do instead of taking antibiotics.”

In 2008, Paltrow started the weekly online publication, goop, to share lifestyle information. Because the star believes so strongly in alternative medicine, she brought licensed acupuncturist and Chinese medicine expert Adele Reising on board. Reising writes about the holistic system of healing on a monthly basis for the site.

Paltrow turns to natural remedies and as quoted above, is a fan of Chinese medicine, “because it works.” However, Paltrow knows the importance of visiting a licensed practitioner.

In a piece for goop, she wrote, “Eastern medicine has a different approach than Western medicine – it’s more holistic. The root of the problem is addressed, as opposed to a symptom being attended to with prescription medication, only to return. When implemented by a professional with experience, the benefits can work wonders.”