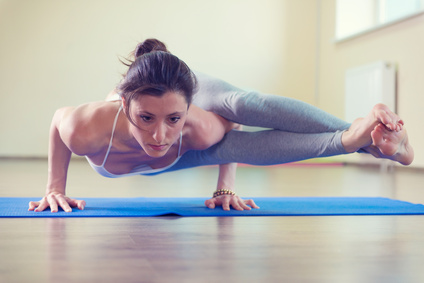 Acupuncturists may call our life force energy Qi, while yoga practitioners refer to it as prana. Though different disciplines, the two have striking similarities and are an excellent complement to one another. Based on Eastern philosophies, yoga and acupuncture are used to create a free flow of energy. In yoga, and the related field of ancient medicine, Ayurveda, the nadis are pathways in the subtle energy body through which prana or Qi flows. They intersect at energy centers, known as chakras. Sound familiar? Nadis are the yogic version of meridians.

Some meridians and nadis run along the same pathway, while others transverse one another or lay side by side. Each corresponds to certain organs or organ systems, elements, and emotions. Blocked energy in these areas is thought to be the root of illness. If an acupuncturist targets a meridian, it will also have a positive effect on the comparable nadi and vice versa.

For instance, say you have a thyroid condition. A yoga teacher would focus on the fifth chakra, or throat chakra, with meditation and poses, such Salamba Sarvasgasana, or shoulder stand. Not only will this help to balance hormones, but traumas, psychological issues, and feelings will be addressed. An under-active or over-active throat chakra can be due to an identity crisis or a feeling that you can’t communicate effectively with others. In yoga, the person as a whole is looked at, including their physical, emotional, and spiritual health. While in a pose like shoulder stand, the meridians along the back of the neck, shoulders, and cervical spine are stretched as well. This can help release prana or Qi that has become stuck.

Now let’s take a look at thyroid conditions treated with acupuncture. Just as yoga is holistic and takes into account the entire being, so does traditional Chinese medicine. An acupuncturist will treat the underlying cause of an issue and not solely the symptoms. In acupuncture and yoga, state of mind, life experiences, and energy centers are just as important as the physical effects of the condition. Acupuncture points on the ears may be stimulated for the thyroid, which is an area that is also associated with the fifth chakra. An acupuncturist will utilize acupuncture points to enhance immunity, balance hormones, and regulate emotions and energy levels, all of which can play a role in thyroid function.

Incorporating acupuncture into your yogic lifestyle is a way to further remove blockages, cultivate wellbeing on all levels, and help accelerate the healing process. When you are able to tap into the subtle energy body through yoga and acupuncture, you’ll experience positive changes in your life and remove stagnation. Acupuncture enhances your awareness, boosts your energy, and helps the muscles recover faster after a yoga session. Physical and emotional problems show up in the body and effect your ability to do certain asanas. Release the tension through acupuncture. Acupuncture will complement the work you do on your mat to take your yoga practice to a deeper level. Just try it!