This time of year, as we’re getting our President’s Day vacations, the image of Mount Rushmore comes to mind. This American icon immortalizes some of America’s strongest presidents: George Washington, Thomas Jefferson, Theodore Roosevelt, and Abraham Lincoln. If I had to pick the “Mount Rushmore” of acupuncture points, I would pick Du (Governing Vessel) 16, Gall Bladder 37, Liver 3, and Kidney 3. These points help clear external conditions, strengthen vision, calm anxiety, and strengthen our willpower, which are all needed to be a powerful leader. 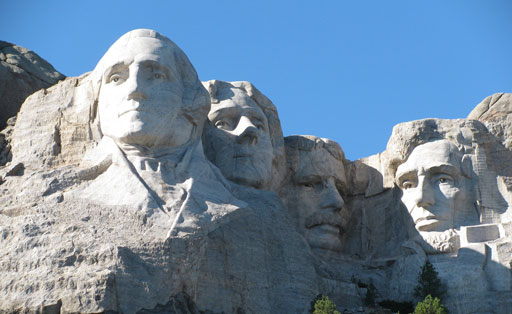 Du (Governing Vessel) 16 is the George Washington point. Located medially and directly below the posterior hairline, it treats external conditions and also calms the spirit. External conditions such as wind, cold, and/or heat can cause us to become ill, but with a slight insertion of Du 16, an acupuncturist can help treat their patient (Deadman 548-550). As the first president of the United States, George Washington also had to deal with external problems, such as the French and Indian War. George Washington was able to achieve success because he had a clear, strong mind, which he prided himself on. He even refused to drink alcohol! Focusing on DU 16 might bring patients a little closer to George Washington’s calm and strength of mind.

Gall Bladder 37 is located about a hand-width above the external malleolus and it helps brighten the eyes, giving a patient clearer vision (Deadman 454-455). The Gall Bladder channel is tied to decision making. Thomas Jefferson was a president with a clear vision for America that he was able to achieve through his bold decisions. Thomas Jefferson sent out Lewis and Clark on an expedition to the West, which led to America doubling in size during his presidency. He had a vision to make America bigger and greater, and that is why Gall Bladder 37 is the Thomas Jefferson point.

Theodore Roosevelt is known for being one of the most masculine, active, and robust presidents. He used activity to help cope with the stresses of everyday life. Liver 3 is the Theodore Roosevelt point. Located in the web of the big toe and second toe, it moves qi, sedates liver yang, and nourishes liver blood and yin, helping the body stay calm (Deadman 477-480). After Roosevelt’s wife and mother died on the same day, he took time away from politics and turned to activity to keep him sane. Similarly, Liver 3 is commonly used to help people relax in stressful situations.

Kidney 3 is the Abraham Lincoln of points. Located midway between the medial malleolus and Achilles, it tonifes the kidneys, especially kidney essence (jing), cools heat, and strengthens the lower back (Deadman 339-342). Abraham Lincoln is known for ending slavery. He used his willpower to change America, which is stored in the kidney essence. He also stood tall with a strong back in order to bring humanity to a challenging time. Abraham Lincoln and Kidney 3 represent willpower.

In order to be a good leader, a president must be able to deal with external conditions, have good vision, have strong qi and blood coursing through his body, and have the willpower to make the right decisions. Mount Rushmore celebrates George Washington, Thomas Jefferson, Theodore Roosevelt, and Abraham Lincoln because they were great presidents. I would love to see Du 16, Gall Bladder 37, Liver 3, and Kidney 3 carved out in stone because they can help make us healthier, and in return stronger leaders.

Dana Fine is a licensed acupuncturist in the state of Illinois and certified as a Diplomate of Acupuncture by the National Certification Commission for Acupuncture and Oriental Medicine (NCCAOM). She is the owner of Dana Fine Acupuncture, LLC in Northbrook, IL. She graduated with honors from Pacific College of Oriental Medicine (PCOM) in Chicago with a Masters of Science in Traditional Oriental Medicine. Dana treats various issues such as; infertility, headaches, musculoskeletal issues, psycho-emotional issues, and insomnia, as well as many other health concerns. She is currently studying the connection between Chinese medicine and Functional medicine. You can learn more about Dana at www.danafineacu.com