If you grew up during the 90s, smoking was not cool. It was actually vilified by television shows. However, it did not stop people from smoking. I see tons of people in their 20s and 30s smoking. I remember college and post college, people smoking at bars, on the way to class, basically anywhere they could. Thankfully people cannot smoke in bars anymore but that isn’t stopping majority of the population from smoking. According to the Center for Disease Control and Prevention (CDC), 17.8% of people in the United States smoke. A fact that is even more alarming is 3,200 people under 18 start smoking everyday, and 2,100 people go from occasional smokers to everyday smokers everyday. It’s shocking how many people smoke, especially because there are 42,000 deaths a year in the United States that are caused by smoking. 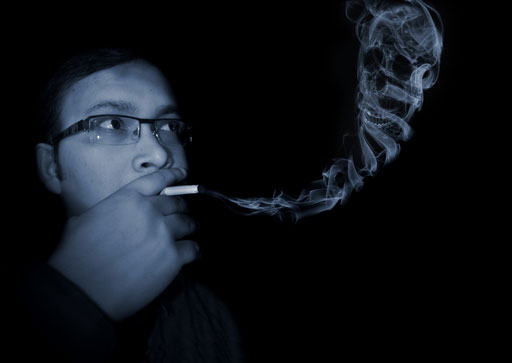 My patients who smoke tell me that there is nothing like coffee and a cigarette. I have seen people literally light up when they talk about smoking. After my grandmother quit smoking she would walk behind people who were smoking and breath it in. She never lost her love for the smell. As the granddaughter of a smoker I hated the way she smelled and how her room smelled. But I loved her, and it was that love that eventually got her to stop. However, that is not the case for most smokers. They can’t just automatically quit one day, they need help.

Acupuncture, in particular auricular acupuncture, is extremely useful for helping people stop smoking, as well as other addictions. The protocol that is used for addiction is called the NADA protocol, and it was created by the National Acupuncture Detoxification Association. When doing the NADA protocol, needles are placed in both ears at five specific locations. One of the points is called Shen Men, and it is used to calm the mind. Another location, the Sympathetic point, puts the body in a parasympathetic state, and the patient becomes more relaxed and able to heal. The other three points are Liver, Kidney, and Lung. By inserting needles at those points in the ear, the patient will start to clean out those organs that have been clouded by smoking. The practitioner will also administer other points in the body that they feel are necessary to balance out the patient’s body. Together all these points help the patient start to quit smoking for good.

After the first couple of treatments the patient will most likely smoke (even though some do quit right away) but they are going to notice different patterns to their smoking habits. They might get satiated from a cigarette faster, forget to smoke during the day, or wake up and not want a cigarette. Some patients start to feel grossed out by a cigarette. It is a similar feeling to eating clean for a month and then eating a sugar free candy. It tastes funny and gross. There will be changes and each patient has a different reaction. The patient should be smoking less and less with each treatment until they stop. The timeline for each patient is individually based, just like everything else in Chinese Medicine. Although, if you do not see a pattern change right away tell your acupuncturist.

Hopefully the number of people who start smoking becomes less and less each year so that the number of people who die from smoking will also decrease. Smoking is not only bad for yourself, it is also toxic to anyone around you. The sooner you quit, the better your body will be in the long run. Acupuncture can help strengthen your lungs so you can move towards a healthier life after you quit. So if you are a smoker, or know someone who is a smoker, and want to quit, find an acupuncturist who can help you today.